All ads and promotions mentoined in this article are for 18+ players only and under current conditions of the T&Cs. Click here to consult the T&Cs 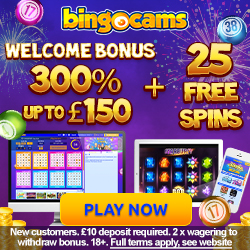 Meet Your Roomies Whilst You Play

One of the crucial differences about playing bingo at Bingocams is that you actually get to see other players during the game. Instead of just relying on chat alone, you can now use your webcam to allow others to see who you are when you’re playing. You also have the opportunity to see who’s in your room, which can add considerably to the bingo fun. In addition to this innovative approach, Bingocams also offers an exciting selection of bingo games options which means there is always something a little different on offer.

A Good Selection of 90-Ball Rooms

As the name would suggest, 90-Ball bingo use 90 balls for the duration of the game. Most real life bingo games use 90 balls, so this version of play is one that most gamers will be familiar with. At Bingocams there are a number of different rooms in which the 90 ball version of the game can be played, each with its own ambience, promotions and chat host. There is usually the chance to win on the completion of one and two lines as well as a full house (checking off all the numbers on your ticket).

If you haven’t tried 75-ball bingo, then why not give it a go? There are two versions on offer at Bingocams; one of which is five line Bingo. For this version of the 75-Ball game, each of your tickets has twenty-four numbers on it. If the calls result in the first vertical line being filled, you win. Prizes are then awarded for completion of each subsequent line as well as a larger win for the player filling their ticket.

For Pattern Bingo, players must get the numbers which make up the relevant pattern on their ticket. Each pattern has a different name, for example “snow” or “jet”. Completion of the relevant pattern means a welcome win. A cash prize is also normally made on completion of a diagonal line. Don’t worry if you find this variation of the game confusing. The chat host will always help out and you can usually take part in a free play game first to get used to it. Once you know your “layer cake” from your “happy face”, you’ll find this version of the game has plenty of appeal.

Reminder. All ads and promotions mentoined in this article are for 18+ players only and under current conditions of the T&Cs. Read the T&Cs | Contact OnlineBingo.info

We use cookies to ensure that we give you the best experience on our website. If you continue to use this site we will assume that you are 18 years or older, always read the T&Cs of bingo sites for the latest terms and conditions and happy with a cookie.OkRead more